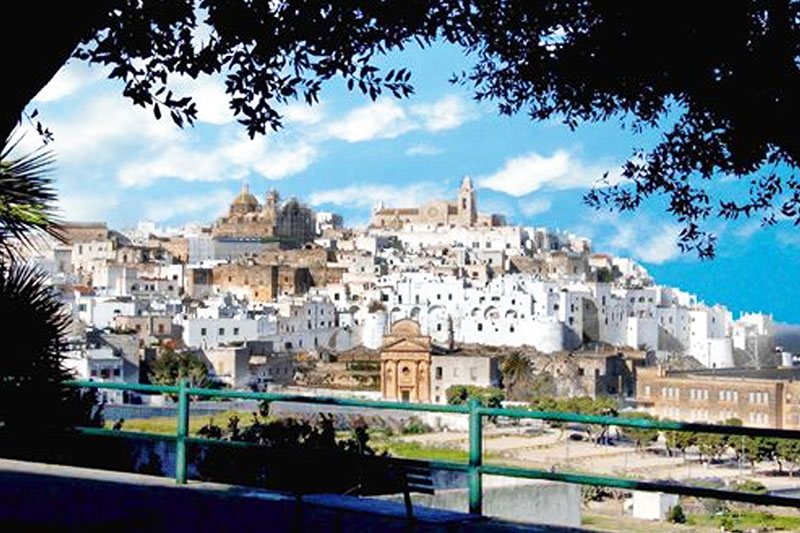 Perched on top of a hill and surrounded by strong defensive walls that separate centuries-old olive trees from clusters of whitewashed houses, Ostuni is an extraordinary sight and a must see on a trip to Puglia.

Ostuni has an ancient history of at least 2500 years was founded by the Messapi, a people who came from ancient Illyria and then was subsequently a land of conquest by the Romans, Ostrogoths, Lombards, Saracens, Byzantines, Normans, Angevins, Aragonese and Bourbons. The most distinctive feature of Ostuni are not so much the historical monuments but its white buildings, which also represent the reason why it takes the epithet of the White City. The practice of washing with lime was used to disinfect houses and streets, thus limiting the plague’s depredations.

It may seem trivial but one of the most beautiful things to do in Ostuni is to get lost in the alleys of its historic center and let yourself be guided by the senses, completely captured by the colors and glitter of the houses and shops and flowered balconies.

The views from Ostuni are worth the trip in themselves. From every corner there are wonderful views, the best of which offer sweeping views of the surrounding countryside and the Adriatic Sea.

Enjoy the beaches near Ostuni. The White City is a stone’s throw from some of the most beautiful beaches in Puglia. 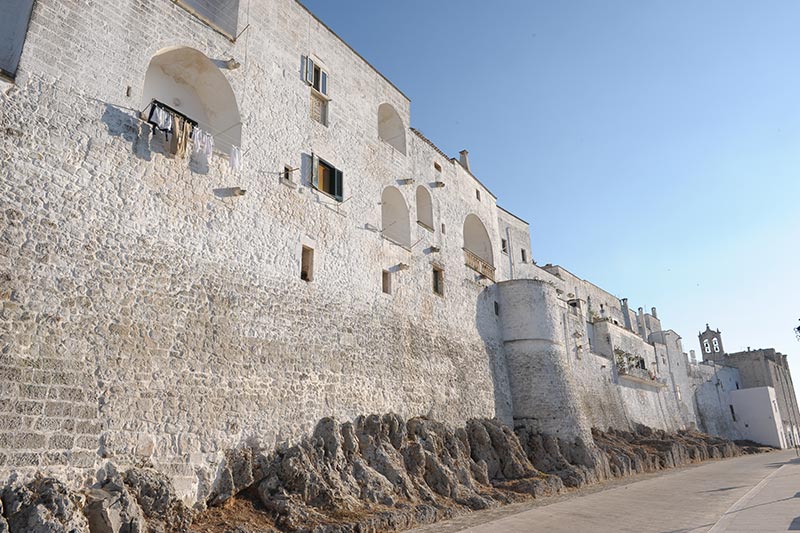 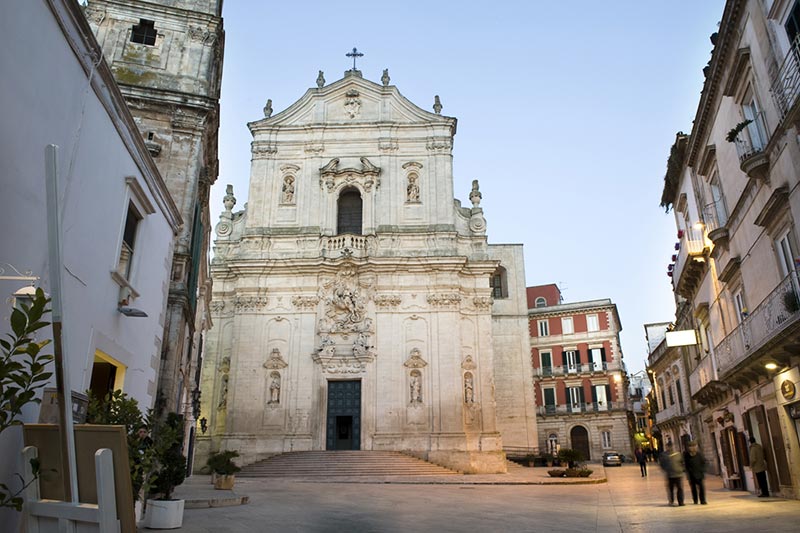 Martina Franca is a charming baroque town a few kilometers from Alberobello and is the largest town in the Itria Valley (the Trulli Valley).

The name with which it is known was given to it for the first time by Filippo I D’Angiò. The epoch of greatest splendor for this town was the eighteenth century when were built the most important monuments and churches that still dot the historic center. Baroque is the dominant style: you can find it in many civil and religious buildings; this style has taken here characteristic features that distinguish it from the other variations of this artistic and architectural current, so much that we can speak of Martinese baroque.The main Baroque buildings are the church of San Martino and the Palazzo Ducale. Strolling in the historic center you are captured by the majestic and suggestive facade of the Basilica where you can also admire the statue of the patron saint, San Martino.Continuing the cultural journey through the history of the city, passing through Piazza Roma, you will find the famous Palazzo Ducale, built by Duke Caracciolo in the seventeenth century and today the seat of the Municipality and main venue of the Valle d’Itria Festival.     An annual summer event for music lovers since 1975, the Valle d’Itria Festival in Martina Franca is one of the main classical music and opera festivals in the world.Every year, between the middle of July and the beginning of August, the festival showcases a series of works.  The operas are generally organized in the enchanting surroundings of Palazzo Ducale in Martina Franca, while orchestral chamber music and choral concerts take place in different venues around Martina Franca and in nearby towns. 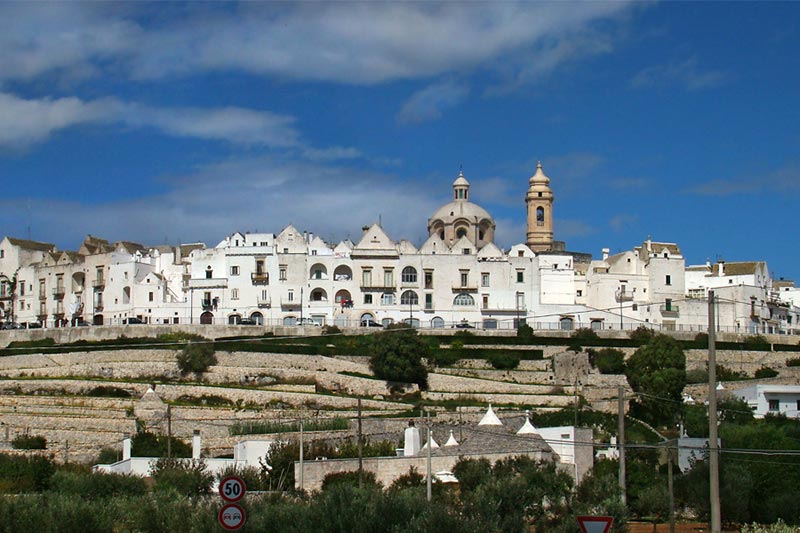 Strategically located in the Valley of the Trulli, between Alberobello, Martina Franca and Cisternino, Locorotondo owes its name to the perfect circularity of the shape of its historic center that contains beautiful and welcoming corners. From the top of its panoramic points, you will be enchanted by the spectacular territory characterized by long stretches of vineyards, olive groves, trulli and farmhouses scattered all around. Locorotondo is one of the most touristic centers of the Itria Valley (the Valley of the Trulli) and is counted among the most beautiful villages in Italy.

Walking through the streets of the historic center of Locorotondo, there are vases of colorful flowers that look out from the balconies and balustrades. Another feature of this beautiful village are the so-called Cummerse, very steep roofs made with local stone. Among the things that stand out in the historic center, we highlight the Mother Church dedicated to San Giorgio, the small but beautiful Church of San Nicola, Palazzo Morelli and the Church of the Madonna della Greca which is the oldest church in Locorotondo.

Locorotondo inhabitants call Lungomare the road that connects the Villa (the panoramic garden) with the market square. It is a street full of restaurants and bars that becomes pedestrianized on summer evenings. But what makes the Lungomare one of the most popular places in the country is the breathtaking view of the Itria Valley. In Locorotondo there is no sea but walking down this street is a bit like walking on a real promenade where it is also one of the best places to watch the San Rocco fireworks competition. 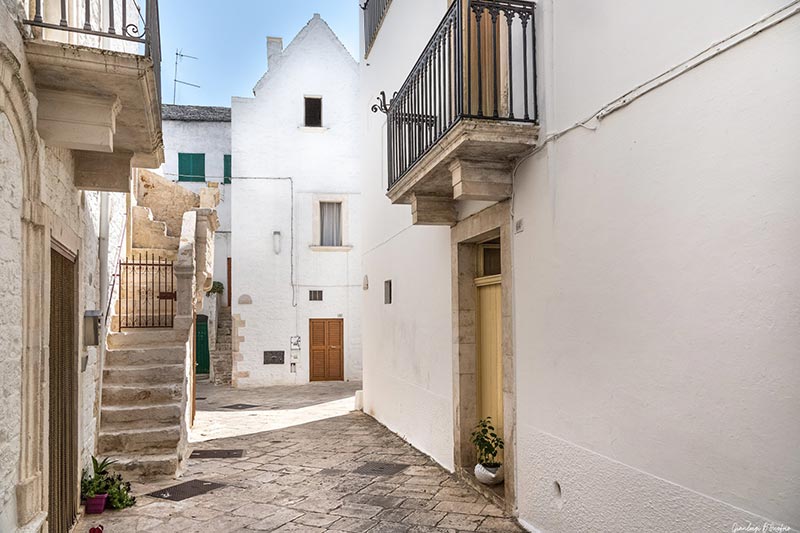 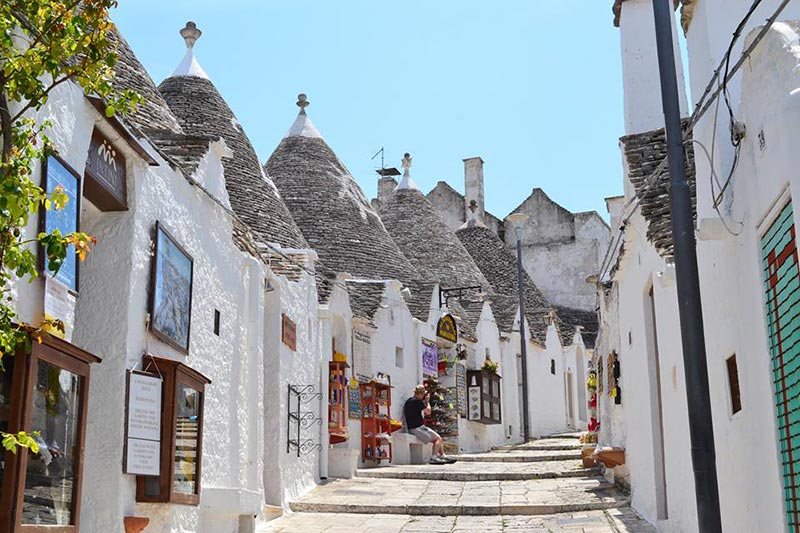 A trip to Puglia cannot be considered such without a visit, even a short one, to Alberobello. This country with over 1000 cones in the historic center since 1996 is one of the 54 Italian sites included by UNESCO in the World Heritage List, it represents a unique place in the world and it is impossible not to be fascinated and struck by its scenographic impact. Walking through the streets of Alberobello is like being immersed in a fairy tale, which is why it is a place loved by everyone: young and old. Alberobello is also recognized as one of the “most beautiful villages in Italy”

Recently Walt Disney also made a cartoon about Alberobello, the characters are called “trullalleri” and they live in a place called “Trulli land”

Trulli are dry stone constructions, built directly on the rock, without foundations, with roughly worked stone blocks resting on each other, without lime to fix them together and covered by a conical structure of small slabs of gray limestone.

The trulli were built because at the end of the XV century, Alberobello passed under the County of Conversano who required that the Trulli be erected dry according to the interlocking stone technique. The aim of the count was to be able to demolish them quickly in case of inspection by the emissaries of the Kingdom of Naples, in order to not to pay taxes on housing. So Alberobello was an abusive village until 1797 when the 3500 inhabitants rebelled against the feudal yoke.

The symbols on Trulli’s cones have always aroused great curiosity. They are hand-drawn and with lime. They have different origins and inspiration: Judaism, Christianity, paganism,zodiacal and astral elements. 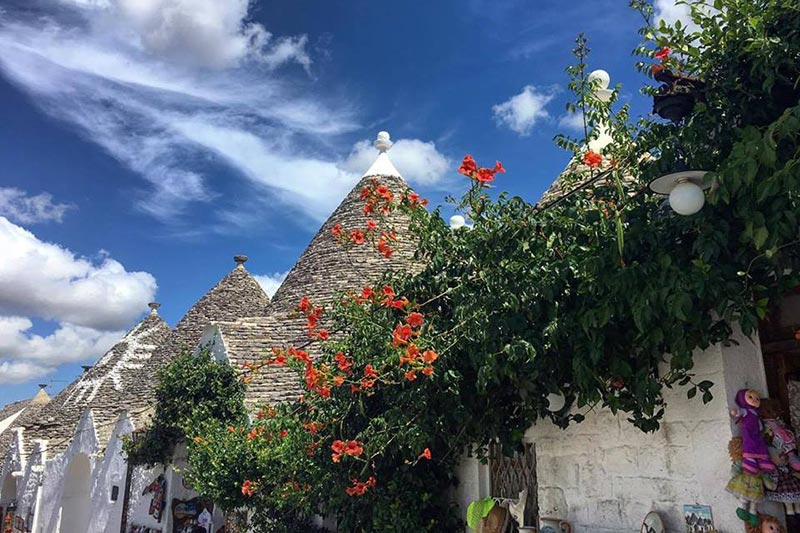 Cisternino is one of the most fascinating villages in the whole area, rich in traditions and where it is a pleasure to get lost in its alleys and small squares. A charm due to its popular and unplanned architecture that distinguishes the historic center.
Cisternino boasts the Orange Flag of the TCI (Italian Touring Club). This is a recognition of quality awarded to small towns in Italy for excellence in tourism, hospitality and the environment. Cisternino is also included in the list of the most beautiful villages in Italy and in the Slow Food towns due to the maintenance of its gastronomic traditions and the protection of local crops and productions such as, for example, the meat that can be purchased in one of the many butchers in the historic center. Here, if you want, the meat is grilled in the same butcher’s shop and ate by sitting at the tables specially arranged outdoors.

The exploration of Cisternino starts from Piazza Garibaldi, with the Villa Comunale (“Municipal Garden”) with the splendid panorama today is admired from the belvedere of Valle d’Itira.

The atmosphere and charm of Cisternino lie above all in wandering between the houses of the historic center and the other ancient neighborhoods that extend beyond the Cathedral and the Torre Grande. Needless to indicate a precise itinerary, also because the beauty of the visit is to get lost and then find yourself. For sure, sooner or later you will pass by Piazza Vittorio Emanuele, with its Clock Tower. Walking through Cisternino you will discover the beauty of the houses leaning against each other, connected by arches, interspersed with stairs, decorated with balconies and stone masks: a popular architectural masterpiece donated by the wisdom of bricklayers and stonemasons with no name. This is perhaps the main reason for spending time between the white walls of Cisternino. 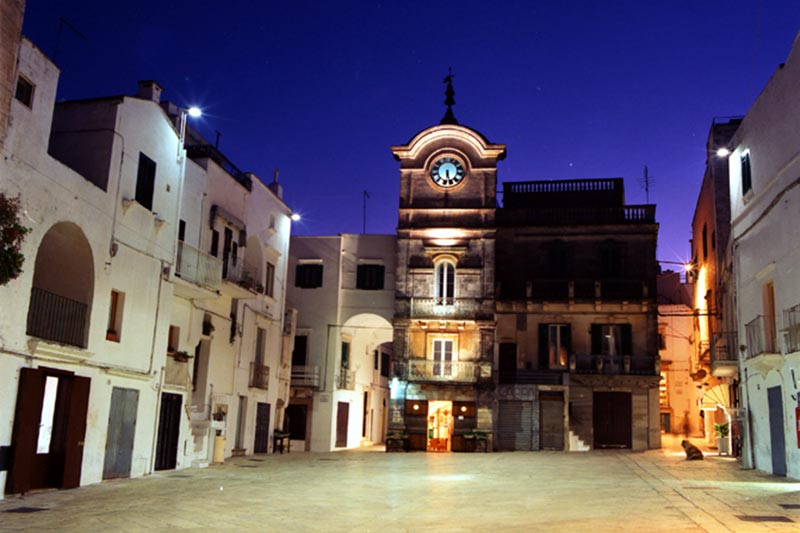